Hauntingly Good Reads at the Library

It's as much fun to scare as to be scared. ~ Vincent Price

We all know the library houses a large collection of research materials at our disposal for all of the essays and research projects we are assigned throughout the semester. Did you know that it also has a wide array of items that can make your spine tingle, stir your imagination, and perhaps conjure up memories of Halloweens past? The horror genre has spanned many forms of media. 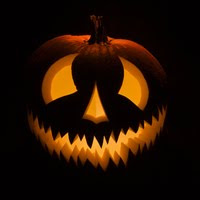 The library carries many of these incarnations within its walls. Reference books, books on the history of the genre, films, books about the films, biographies on iconic actors and directors, and even books on the aesthetics of horror are available for your consideration.

Literature is the perhaps the most obvious thing that would be in the library, so we will begin the tour there. Some of the authors the Albertsons Library has are Edgar Allen Poe, Algernon Blackwood, Guy de Maupassant, and Stephen King. H.P Lovecraft is a personal favorite of mine and his Cthulhu mythos has met with a revival in the last decade or so.

There are also biographies on the icons and studios involved in making the horror genre what it is today. The Lost One: A Life of Peter Lorre, Alfred Hitchcock: A Life in Darkness and Light, and Vincent Price: The Art of Fear (the title of which holds some humor for this writer, as Price had a radio show I listen to quite often called The Price of Fear) are only a few that we have at the library. There are several books that focus on Hammer Films, the company that produced a number of films starring Christopher Lee and Peter Cushing as Dracula and Dr. Van Helsing respectively.

We also have, in the Curriculum Resource Center (CRC), films as well as juvenile fiction and children’s stories. Again, if you have a more classic bent, we have the silent films Nosferatu and The Cabinet of Dr. Caligari, as well as the movie based on a novel by Shirley Jackson, The Haunting. For some of the juvenile literature, we have Scary Stories 3: More Tales to Chill Your Bones, which also happens to be on the Banned Books list, as well as Ask the Bones: Scary Stories from Around the World. Even the little ones can get into the, if you’ll pardon the term, spirit of things with books like Teeny Tiny Tingly Tales and Cobwebs, Chatters, and Chills: A Collection of Scary Poems.

Those titles listed above are not even close to the vast amount of sources the Library contains. So, if you need an escape from the everyday grind of studies or just even need anything from the horror genre for a bit of research (it does happen), the Albertsons Library is a great resource. Search the Library’s catalog for your favorite horrific titles at: http://boisestate.worldcat.org/

Posted by Memo Cordova No comments:

In a rush? Ask us to get a book off the shelf for you!

Too busy to hunt for the book you want in the library? Let us help! If you need an item from the library and it's not checked out, ask us for an "on-shelf hold."

We'll pull the item from the shelf and hold it for you at the library's Circulation Desk on the first floor -- usually that same day! This service is available to all students, faculty, and staff.

Here's how to do it:
Posted by Memo Cordova No comments:

Email ThisBlogThis!Share to TwitterShare to FacebookShare to Pinterest
Labels: Announcements

EndNote Web can manage your citations, keep you organized, create bibliographies, can be accessed anywhere, and EndNote Web can help you retrieve saved articles. Interested in learning more about this awesome citation management tool? Go ahead and email me, Amy, to confirm your attendance. We'll be meeting in Library room 203. Please sign up and register for an account with EndNote Web before the class!
Posted by Amy Vecchione No comments:

Email ThisBlogThis!Share to TwitterShare to FacebookShare to Pinterest
Labels: Announcements

Become a Library Expert in 10 Minutes or Less 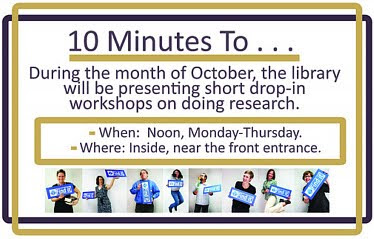 Are you daunted by an upcoming research project? Want to know more about what the library has to offer? Albertsons Library is pleased to announce a new series of drop-in sessions that can make a library expert out of anyone! The "10 Minutes to..." sessions will take place daily at 12:00 noon from Monday to Thursday throughout the month of October.

Boise State librarians will cover the essentials of research with lightning speed! Look for us just inside the library's front doors, near the entrance to Starbucks. Planned workshops include:

There's no need to RSVP or plan ahead; just stop by at noon and check them out. Come for one session, or come for all of them -- it's up to you. See you there!

Posted by Elaine Watson No comments: