Announcing the Cenarrusa Papers and Exhibits 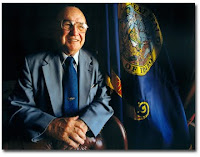 Longtime Idaho Secretary of State Pete Cenarrusa has donated his political and personal papers to Boise State University. Documenting an extraordinary career in public service in both Idaho and on the international stage, the papers fill nearly 100 boxes and span the entire second half of the 20th century.

The son of Basque immigrants, Pete Cenarrusa was elected to public office 17 times—9 times as a state legislator and 8 times as Idaho Secretary of State—compiling a record of 52 years of continuous public service, the longest tenure of any officeholder in Idaho history. In a career of more than fifty years, from 1950 to 2002, Pete Cenarrusa became one of the most popular politicians in the state. Over the course of that half century, both he and his wife Freda were active in numerous political, civic, and cultural causes, and Pete Cenarrusa used his influence as a senior American statesman of Basque descent to work for peace in his ancestral homeland.

Albertsons Library celebrates this gift from Pete and Freda Cenarrusa by showcasing a new online exhibit, "The Public Career of Pete Cenarrusa." The Special Collections Department has also mounted an exhibit of photos, plaques, and other memorabilia in their display windows on the 2nd floor of Albertsons Library. The exhibit can be seen whenever the library is open through the end of the year.

For more information contact the Special Collections Department at 208-426-1674.