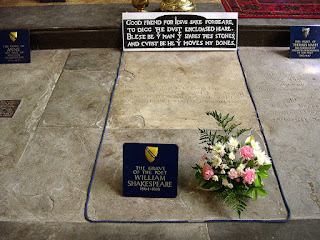 April 23 marks the official 400th anniversary of Shakespeare’s death in 1616.  Students, faculty, and staff are invited to celebrate on the quad Friday, April 22 from 11am-2pm with birthday and death-day cakes, a Shakespeare selfie-station, and interactive exhibits that highlight Shakespeare’s contributions to literature and culture.

Though there is no definitive record of Shakespeare’s birth, his baptism was recorded in the register of Holy Trinity parish church in Stratford on April 26, 1564.  Based on Elizabethan traditions, scholars suggest that this indicates he was born on April 23.  There is also no definitive record of his death, but he was buried at Holy Trinity church April 25, 1616 and scholars generally accept that he died on his 52nd birthday on April 23.  The cause of his death is not known.

In honor of the 400th anniversary, The Folger Shakespeare Library in Washington, D.C., presents “First Folio! The Book that Gave Us Shakespeare.”  Published in 1623, seven years after Shakespeare’s death, the First Folio was the first collected edition of his plays.  It contains 36 of the 38 surviving scripts, including 18 works that were previously unpublished and would likely have been lost without the Folio.  This includes titles like, “Macbeth,” “Julius Caesar,” and “Twelfth Night.”  This national traveling exhibition comes to Boise August 20-September 21, 2016. The Folio will be on display in the Arts and Humanities Institute Gallery in the Yanke Family Research Center.  For related programming updates visit: http://archives.boisestate.edu/shakespeare2016.php