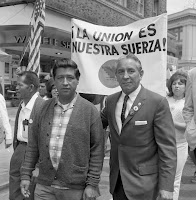 Fifteen photos by Claudio Beagarie documenting the struggle of California farm workers for social and economic justice in the 1960s will be on display at the Albertsons Library through Labor Day.

Beagarie, a community activist with a commitment to progressive causes, captured images of farm workers in their homes, in the fields and marching with Cesar Chavez, cofounder of the United Farm Workers of America and the best-known leader of the movement.

The images chronicle some of the dramatic moments of the struggle in 1966 and 1967 — the grape boycott, the march from Delano to Sacramento and the rally in San Francisco — as well as scenes of the everyday life and work of the mainly Latino and Filipino farm workers.

“I have been deeply involved in the Latin American community for the past 40 years,” states Beagarie, who now lives in Boise and holds a degree in geology from Boise State. “I have been an activist and have chronicled events with both pen and camera. By utilizing a candid photo style, I seek to capture the enthusiasm of people involved in struggle. I seek to record the times of happiness and sadness, their times of triumph and defeat. I view my photography as an investigative research tool, as photos can be analyzed at a later date for cultural meanings that are not evident at the time of shooting.”

The 11×14-inch photos are on display in the Special Collections exhibit windows on the library’s second floor and can be viewed whenever the library is open. To check library hours, visit library.boisestate.edu/calendar/main.php.
Posted by Erin Passehl