Scarlet Macaw to fly away for the last time! 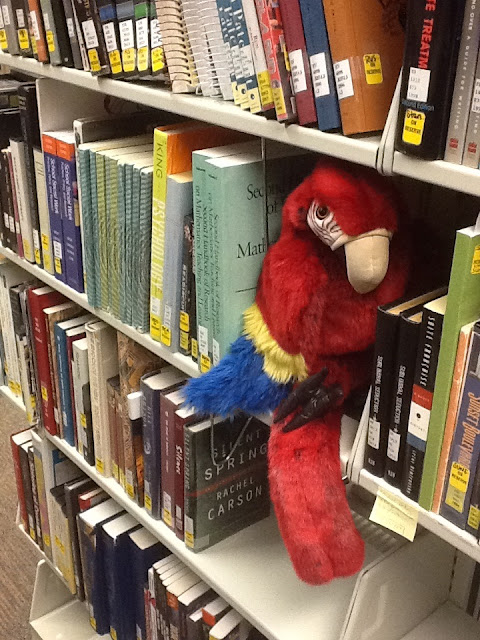 Have you found the Scarlet Macaw? Our dear friend, Sebastian the Scarlet Macaw, is about to fly away for the last time. He has spent the Fall 2012 and Spring 2013 semesters here at Albertsons Library as an ambassador for the Campus Read selection, but now the semester is coming to a close.

Last Flight of the Scarlet Macaw, by Bruce Barcott, is a non-fiction work that recounts the story of Sharon Matola. She became embroiled in a crusade to stop the construction of a dam that would flood the nesting grounds of the only scarlet macaws in Belize. According to the Fish and Wildlife Service macaws are listed in the “Least Concern” category of the endangered species list, they are at risk of extinction in Belize due to habitat destruction.

Sebastian’s life here at the library has not been quite so dramatic, but he has certainly done his share of migration. He has traveled to the 4th floor to find out more about his fellow birds. He has traveled to the 3rd floor and perused the works of Shakespeare, Dickens, and Austen. He has visited the Curriculum Resource Center on the 2nd floor and listened to music from Coltrane to Bach. Some days, he has simply perched atop the New Books section and watched students come and go through the library entrance.

Each time he has been returned to the Circulation Desk by a keen-eyed student who subsequently received an entry into a prize drawing! The drawing will occur Thursday, May 9th at 1:00 p.m., which means there is not much time left to find the Scarlet Macaw!

Prizes will include Sebastian himself, as well as copies of next semester’s Campus Read selection Half The Sky by Nicholas Kristof and Sheryl WuDunn. So keep your eyes peeled! The Scarlet Macaw could be on any floor of the library, even in plain sight. Return him to the Circulation Desk for your chance to win; there is no limit to the number of times you can enter!