Lady Bluebeard in print and almost in Hollywood

Special Collections houses the papers of William C. Anderson (MSS 218), an Idaho author of several books, including the popular Lady Bluebeard published in 1994. 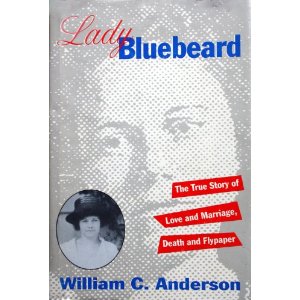 Anderson grew up in Boise and spent much of his adult life here. He was a recipient of the Boise State University Distinguished Alumnus Award and inducted into the Boise High School Hall of Fame.

His book Lady Bluebeard explores the life of Lyda Southard, an Idaho woman who married seven times and murdered four of her husbands, was convicted and sent to the Idaho State Penitentiary in the 1930s, escaped and was caught and sent back, and finally received a pardon in 1942.

Lyda was a Twin Falls resident and is one of the country's first female serial killers. As an April 1957 Argosy Magazine article in the collection stated, "Men hung around Lyda like flies over molasses."

The Anderson collection contains much of his research notes on the book, as well as attempts to get the book made into a movie. Letters to Anderson from readers of his book who had known Lyda are also included in the collection. Anderson’s correspondence with Idaho’s former governors Cecil Andrus and Phil Batt convey his attempts in trying to have a film made about Southard. As Anderson states in a letter to Governor Cecil Andrus from September 1993, "The notorious Lyda Southard lived in Twin Falls and dispatched a passel of husbands. After insuring them, she boiled the arsenic out of flypaper and put it in their apple pie."

Anderson submitted this letter requesting Andrus support his presentation of making the story of Lyda into a motion picture. Andrus did support his request and in a response letter wrote, 'Hers (Lyda) is certainly an intriguing tale and should capture the imagination of Hollywood."

As seen from his letter below, Andrus goes on to write in a separate letter that the Idaho Department of Commerce's Film Bureau will provide assistant to the project, and the Old Idaho Penitentiary where Lyda was an inmate could be used as a location for the film. 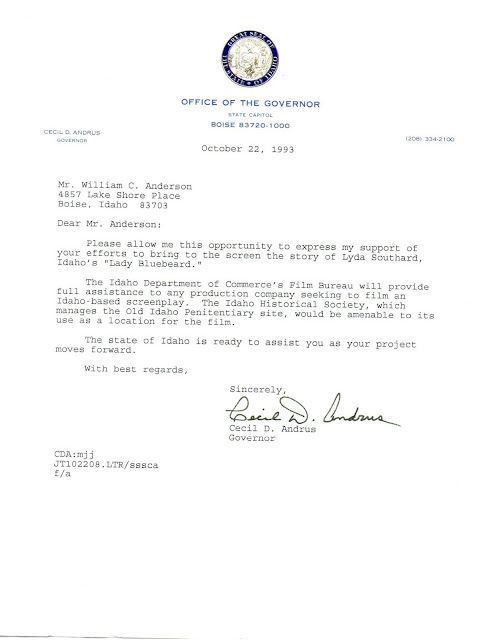 Anderson had completed a draft of the screenplay for the movie and was promoting a film version of his book at the time of his death in 2003.