For Theatre studies, or just for fun! New video database 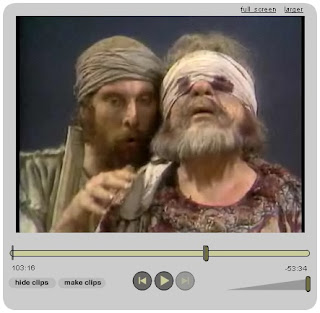 video still from From King Lear (1988)
Whether you're interested in plays, playwrights, or acting, check out Theatre in Video, a new database of online streaming video productions of live plays from the 1930s to the 20th century, including BBC's productions of every play in the Shakespearean canon.
Find plays written by Samuel Beckett, Anton Chekhov, Harold Pinter, William Faulkner; plays starring Meryl Streep or Anthony Hopkins; and much more.

According to Alexander Street Press, the creators of Theatre in Video:

With live television broadcasts of New York productions from the 50s, revivals of classic works and experimental performances from the 60s and 70s, as well as important contemporary performances, Theatre in Video covers a wide range of 20th century theatre history. Unlike Hollywood adaptations, these are the actual original productions, captured and recorded while performed for a live theatre audience.

Watch from home, work, or in the library. To access from off-campus, just log in with your BroncoWeb ID and password. Find a play to watch online now! ->

Email ThisBlogThis!Share to TwitterShare to FacebookShare to Pinterest
Labels: Databases